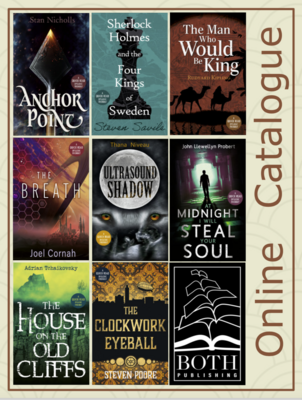 The titles in the series are…

Anchor Point: Stan Nicholls brings a note of nostalgia of Heroic fantasy, with his signature storytelling, a tale of heroism and personal growth. One that can be read and re-read, always bringing a smile at the finish.

Sherlock Holmes and the Four Kings of Sweden: Steve Savile hits the perfect note in this homage to Sherlock Holmes. Those who are familiar with Conan Doyle style of prose and storytelling are in for a treat.

The Man Who Would Be King: A Rudyard Kipling classic. A story about two British adventurers in British India who become kings of Kafiristan, a remote part of Afghanistan.

The Breath: Joel Cornah creates an intriguing science fiction story that slowly peals a layer upon layer of rubble to expose myth and science combined.

Ultrasound Shadow: A thoughtful treatise on pregnancy wrapped up in a bloody body-horror bow. Thana Niveau brings the ordinary into the supernatural.

At Midnight I Will Steal Your Soul: If you are looking for a quintessential horror, John Llewellyn Probert certainty delivers. Building on its atmospheric setting the mundane descends into madness.

The House On The Old Cliffs: A imaginative mystery to be solved, which Adrian Tchaikovsky, a master of the unexpected, manages to entice and string you along, until you don’t want, but need to know the answers.

The Clockwork Eyeball: Reminiscent of masters of the spy genre, Steven Poore tells a tale of daring-do in a world of intrigue, with his usual flair and immaculate writing.

Brought to you by The Reading Agency.

View our other programmes